The story of Dark Fiber

Dark fiber is not a buzzword. It has been around for years and is here to stay.

But what are we talking about with "Dark Fiber"?

And what's the difference with "regular" fiber?

Optical fiber is a technology used to transmit data using light. This is not new, Alexander Graham Bell actually conceptualized it in 1880. Yet, it has many advantages:

But above all the major advantage is... speed!

In theory, there's no way to transmit information faster than light in the universe.

So what is dark fiber?

Back at the end of the 90s, the adoption of internet was booming. The economy was strong and many software companies were at the top. These years also saw an explosion of new telecommunications providers.

It was the beginning of the Information Age, an economy based on Information Technology so the demand was only expected to be rising for the years to come. Many telecom companies started to install fiber cables in metropolitan areas. The cable was cheap, but installation required civil engineering, which made it slow and expensive. It made sense to prepare for the near future and install more capacity than necessary. The plan was to prepare the equipment, seat back, and wait for the people to insert this into their computer: 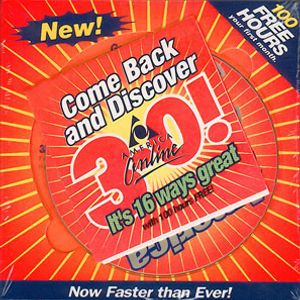 At some point in time half of the CDs produced in the world had an AOL logo on them. But people under 30 probably don't recognize this and there's a reason for that...

Money was flowing, IT companies were more powerful than ever and everybody wanted a piece of this big pie, so what could possibly happen?

Well, this is what happened next:

The dot-com bubble exploded, and a telecom meltdown followed. Companies that spent billions to build optic fiber networks were crushed by their accumulated debt. Some former giants would never recover, such as AOL, Netscape, Lycos, AltaVista, 360networks, WorldCom and many more. Those who survived became dominant in their market areas, like Amazon, eBay and Google.

But this crash is only half of the story, as the demand for internet connectivity didn't decrease.

At the same time, a huge technological leap happened. Instead of using the whole spectrum of light to send a signal, they realized using only a reduce wavelength (or "color") made it possible to transmit multiplexed signals over the same fiber strand. By splitting the signals between different wavelengths, or colors, you can actually send multiple signals over the same cable and they remain completely independant!

This technology multiplied instantly by 100 the quantity of information we could transmit over the same fiber cable. Increasing the number of wavelengths used in a fiber cable was possible without expensive upgrades, hence there was no need for so many cables anymore.

But it was too late, the equipment had been installed and stayed unused. Staying dormant for years with no light passing through them, these cables were called "Dark Fiber".

The use of Dark Fiber nowadays

Over time, organizations realized that this unused equipment could bring an almost unlimited bandwidth and low latency to their network architecture. Recent bandwidth demanding services like HD video streaming and the global adoption of cloud services wouldn't have been possible without this infrastructure already in place. And tomorrow's services like 5G connectivity also depend on it.

Enterprises can use dark fiber to create a privately-operated optical fiber network between remote locations. Capacity can be added when needed by using WDM. Connecting remote sites using dark fiber offers the greatest flexibility and control.

Google, for instance has dark network capacities for video and search data, and also for a part of their own network for security reasons. Tech giants, trading platforms and SMEs are all using more and more the dark fiber network for redundancy, bandwidth, low latency, security and cost control. Because on top of that it's not expensive to use these cables!

Soon you might also be coming to the dark side...